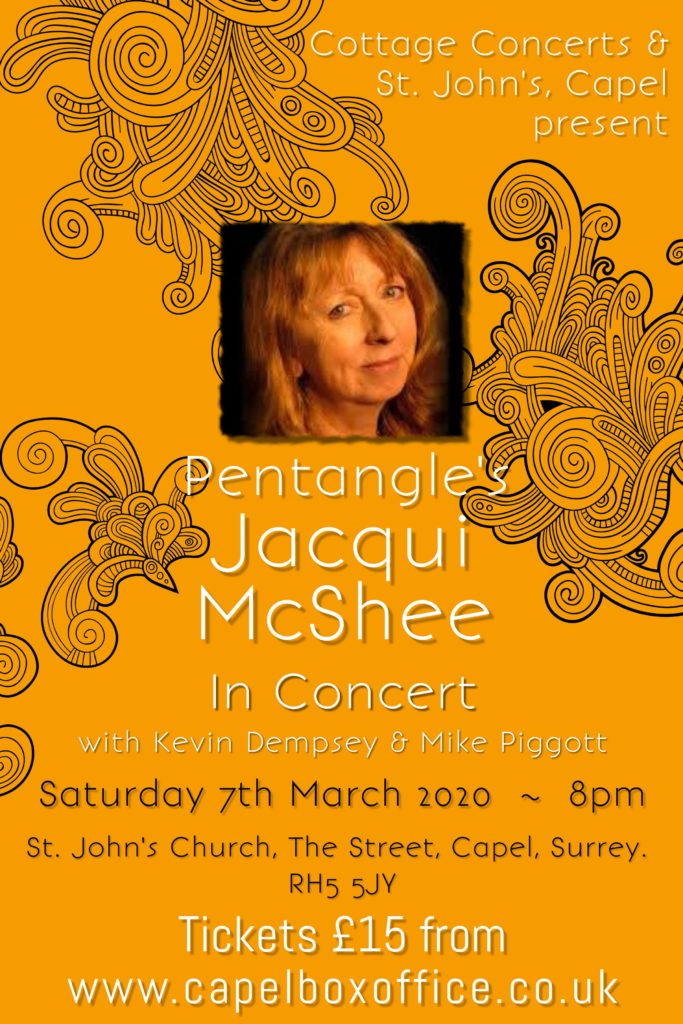 With Kevin Dempsey and Mike Pigott

Born in Catford, South London, Jacqui first discovered her passion for singing whilst attending CND marches across London with her Sister Pam.

Following her regular attendance at Jazz and Folk clubs in and around London, she started a folk club at the Red Lion Pub in Sutton, SW London with friends Christine Skivens, Dougie Buntrock and Chris Ayliffe.

Chris, a fine 12 string player and Jacqui were to be the residents of the club. Chris, who knew guitarists John Renbourn and Bert Jansch introduced Jacqui, and she went on to feature on John’s 2nd Album, ‘Another Monday’. Jacqui was subsequently invited to join John on several gigs, debuting at the famous ‘Les Cousins’ club, with the pair performing as a duo from 1965 through to the birth of Pentangle in late 1966.

The newly formed band, consisting of John Renbourn and Bert Jansch (who had previously collaborated on the duet LP ‘Bert and John’ both on guitar and vocals, Jacqui as main vocalist, with Danny Thompson on double bass, and Terry Cox on drums.

The group started a residency in January 1967 at the Three Horseshoes Pub on Tottenham Court Road in London’s West End on Sunday nights. Audience members were frequently made up of fellow musicians, including Sandy Denny, Paul Simon and Ralph McTell.

Pentangle’s first major concert saw them play to a sold out audience at the Royal Festival Hall, on 27th May 1967, catapulting them into a steady stream of world wide tours and festivals.

Online ticket sales for this event are closed.